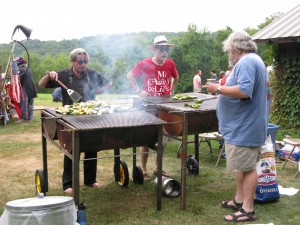 Fraboni supervising the grill at Come Over CD Launch Party 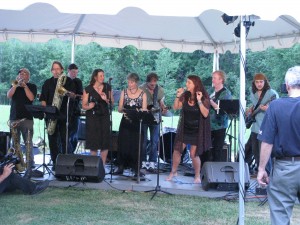 The DFJB at the Come Over CD Launch Party, Guilford Vermont

For our 34th Unofficial” Anniversary, while I was recuperating from an emergency appendectomy (maybe, if you’re lucky, the subject of a future blog), Patty bought me Keith Richards new critically acclaimed autobiography, “Life”. And while I haven’t read it yet (that sort of book is more her cup of tea, but, hey, who doesn’t love Keith Richards), I did turn immediately to the index to see if our good friend and musical mentor Rob Fraboni was referenced. He was all over four pages and here’s a small bit:

“Twenty-odd years after I began playing with local Rastafarian musicians, I went back to Jamaica with Patti for Thanksgiving 1995. I had invited Rob Fraboni and his wife to come and stay with us – Rob had originally met this crew in 1973 when I first knew them. Fraboni’s holiday was cancelled on Day One because it turned out that at this moment all the surviving members were present and available, which was rare; there had been a lot of casualties and ups and downs and busts, but this was a once-in-a-lifetime opportunity to record them. Fraboni somehow had bits of recording equipment available courtesy of the Jamaican Minister of Culture and promptly offered to record the setup. This was a gift from the gods!

A gift because Rob Fraboni is a genius when you want to record things outside the usual frame. His knowledge and his ability to record in the most unusual places are breathtaking. He worked as a producer on “The Last Waltz”; he remastered all the Bob Marley stuff. He’s one of the best sound engineers you can ever meet. He lives round the corner from me in Connecticut, and we’ve done a lot of recording together in my studio there, of which I’ll write more later. Like all geniuses, he can be a pain in the arse, but it goes with the badge. “

He goes on to explain how Fraboni helped him find an audio pathway out of the technological nightmare that recording had become. Richards and Fraboni believed that the idea of separation of the musicians was the total antithesis of rock and roll. They built a studio in Keith’s home and experimented recording the room as opposed to dissecting every instrument with microphones and the result was the Grammy winning recording of “You Win Again” on the Hank Williams tribute album “Timeless”.

We met Fraboni when we had just finished the mix on “Come Over”, the latest album from Patty Carpenter and the Dysfunctional Family Jazz Band. The album had been recorded at Hugh Pool’s Williamsburg (Brooklyn) studio, Excello, and at Northern Track in Wilmington, Vermont and we loved the sound and were debating whether we even had to get it mastered by a specialist.

With perfect timing, Alan McCarthy, Melissa’s husband and my son-in-law, had just met Fraboni at the 11th Street Bar where Alan was tending bar (amazing how many of these connections are greased with the sociability and other comforts of the local pub). He played him the album. Fraboni was impressed and intrigued and offered to master it at a substantial discount. We signed on and our minds were blown by the increased clarity and just pure sound of the mastered version when A&B rolled (compared) with the earlier version (which we had loved).

Melissa and Alan were with him at his studio for the two days he devoted to the task, watching him move from one corner to the other, scrunch up on a couch or on the floor, listen for awhile, turn a few knobs, listen from another perspective and so forth. Melissa and Rob bonded over memories of Wayne Shorter and Milton Nascimiento’s album “Native Dancer”, which Rob had mixed. As a child, Melissa used to fall asleep to the record every night and the DFJB had recorded Ponta de Areia on the first album “Under My Hat“.

He also put the songs through a software program called Real Feel, a software program which he has developed, which, as much as I understand it, connects the missing dots at the high frequencies of digital sampling, resulting in a warmer, more analog type sound. Fraboni claims it is the new dolby. I just know the record sounded a lot better after he got through with it.

If you follow the links and look up Rob Fraboni, you’ll find someone who has had a long and varied career in the music industry. He’s a sound geek who has speakers named after him and who has designed and built studios for the likes of Keith Richards, Bob Dylan and Neil Young. He’s produced, recorded, mixed and mastered a veritable Who’s Who list of major artists over the last 40 years. He’s also worked the business side of the equation having been a vice president for Chris Blackwell’s Island Records and as the manager of his own boutique record labels for a number of years.

A few weeks after the mastering session, we were all having dinner together at Barbone a fine Italian restaurant on the Lower East Side. Rob is rail thin, but he can still put away the food like there’s no tomorrow. He is also a person whose mind is constantly running way ahead of his ability to get the words out. At one point, I asked him if he could be of any help to us in finding an agent, or management, or a record company or any of the accoutrements you would think we would have after so many years in the music business. His eyes brightened up and he said that he was trying to start his own boutique record label, the prospects for funding looked good, and he would love to take on “Come Over” as one of his first releases.

We knew the music business, especially in its current downward spiral (the recording industry once worth $18 billion a year is now worth $7 billion, approximately), is a universe of smoke and mirrors. On the other hand, Rob was enthusiastic and our best contact, and slim is always beter than none. Suffice it to say that after a year of ups and downs and possible breakthroughs and coulda, woulda, shoulda, the idea of the boutique label crashed and burned. Back to DIY.

So we released it ourselves this summer in a beautiful field in the Vermont country. It was done as a benefit for a local group working to shut down the nearby nuclear plant in Vernon.  We got lots of local press and some great reviews. We recorded it with three HD video cameras and expect to have some songs coming out soon. Rob and his new girlfriend Kelly came and stayed for the weekend.  They are expecting a baby girl sometime in the near future.

At any rate, I wanted to give a shout out, as the tv talk show hosts say, to Rob Faboni who took our album to another level, but who also has become a good friend and member of the extended family.  It’s nice to know that Keith Richards feels the same way. And, btw Keith, if you ever want to sit in with the DFJB just drop on by.