What the Critics Are Saying 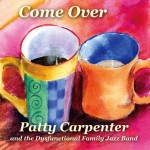 “With its artful musical mix of jazz, rock, folk, funk, blues, reggae, soul, bossa and more, and its equally easy lyrical turns from serious to sublime, the new CD Come Over does pose problems-at least for people who try to categorize it.Actually, if there’s one bin the CD doesn’t belong in, its the one marked “dysfunctional.”Come Over is a CD on which all the pieces fit; one whose diverse songs tell an engaging, coherent story. It’s a seasoned, soulful work with depth and real feeling to go with strong chops.

It is emotionally rich without being contrived; grown up and serious but still with time to dream and dance. It’s consistent right down to the cover – Joan Peters’ painting of two coffee mugs side by side speaks of a warm invitation for two friends to spend some time together.”— Jon Potter, The Brattleboro Reformer

“Are You Ready for the Country? Before many of you were born, Western Massachusetts was dotted with communes founded by city kids who’d decided that back-to-the-land was the best idea going. At that moment, farming seemed like a reasonable use for my English Lit degree, so I grabbed a chilly bedroom overlooking the back 40. Turns out I like central heat and a favorable male/female ratio, so I moved on. Patty Carpenter and her old man — I think that’s what I’m supposed to call my pal Chuck Light — stayed. And she’s spent decades making music about her life. Now, writing with Verandah Porche (no, not a typo), she’s released a 12-song CD that’s wood smoke and open fields, long dinners with friends and cold mornings by mountain streams. Feel free to Come Over — and to be surprised: Patty’s a grown-up pro who just happens to live far from the bright lights.” — Jesse Kornbluth, Headbutler.com 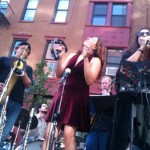 “They also had a stage set up and a dynamite group, the Dysfunctional Family Jazz Band, was putting on one heck of a show. And, they really were all family members. Whether they were truly dysfunctional, I do not know. One thing for sure, you don’t have to polish your saxophone for it to sound good.” — Onethousandbars.com 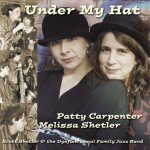 …”Angel From Montgomery is the song you think it is, and probably the only time there has been a jazz cover of John Prine. These folks make it work. Patty Carpenter and Melissa Shetler trade lines seamlessly, and blend beautifully on the chorus. Female jazz singers are often either sweet and flirty, or smoky and seductive. Here, we got one of each, and it really works. The arrangement reminds me of Cannonball Adderley’s Mercy Mercy Mercy; I never would have thought of doing that with this song, but it too works beautifully.”— Oliver Di Place, oliverdiplace.blogspot.com

“A family who plays jazz together stays together, or so it seems from the family affair on Patty Carpenter’s latest CD. Joined by daughter Melissa Shetler on vocals and the Dysfunctional Family Jazz Band, led by Patty’s ex, Scott Shetler, Carpenter and her group gathered themselves in a farm house set in the midst of the bucolic surroundings of the Delaware Gap to put this entertaining session together. One of the pleasant surprises on this album is that mother and daughter have their own quite distinctive and separately recognizable voice. No vocal cloning here. These disparate sounds come together very well both when they solo and when they harmonize. One of the many exemplary tracks on the set is a raise-the-arms-and-voices-to-the-heavens version of Bobby Timmons’ “Moanin’,” with Scott Shetler playing a preacher testifying from his musical pulpit. Another fine cut is “Glory of Love,” with Shetler laying down some serious sax over which the jaunty vocals of mother and daughter ride. There’s no jazz vocal style these two singers don’t handle with ease and aplomb. A Latin version of “Watch What Happens” has the two weaving voices in, out, and around each other for some scintillating call-and-response harmonizing. The cleanly picked guitar of Draa Hobbs helps considerably on this track. ‘They Can’t That Take Away From Me’ conjures a small club setting with happy customers enjoying the music and ambience. This family obviously enjoys working together, as there’s nothing stiff or reserved about the performances on this recommended album.” — Dave Nathan, All Music Guide

“UNDER MY HAT is a highly likeable jazz entry, the vocals subtle and sultry, the music like sipping a nice glass full of Scotch, and the atmosphere filled to the brim with life. There are 12 songs on this CD collection. Among the songs are found “Careless Love,” “Watch What Happens,” “Glory of Love,” “They Can’t Take That Away From Me,” “Under My Hat,” and “All the Things You Are. The jazz listening audience will like the warmth and life this CD collection shares in an entertaining, pleasant listening adventure. If you are looking for excellent jazz vocals, solid performances, and classic song stylings, give a listen to UNDER MY HAT. This one is worth your time, and it is truly an enjoyable listening journey. Excellent vocals and performances on every song. The performers shine on this collection, and “All the Things You Are” is but one of many fine jazz vocals discovered on UNDER MY HAT. Patty Carpenter and Melissa Shetler give perfect duets, and perfect solos. Jazz vocals at their best!” — Lee Prosser, Jazzreview.com

The latest release, “Under My Hat”, is collaboration with her daughter, Melissa Shetler, also a jazz vocalist and the Dysfunctional Family Jazz Band (which includes Melissa’s father, Scott Shetler). The album is an eclectic and dynamic mix of jazz, blues, pop, and Latin tunes. – Jazzreview.com 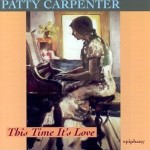 “Patty Carpenter displays the casual professionalism that one would expect from someone who’s worked the woods as a singer. She knows and loves these songs. She’s comfortable with them, and treats them all as good friends, taking them as they are and enlivening them gently. Her one original, Across the Square, gets that same treatment, easily fooling the listener into believing this, too, is a standard, albeit one not often heard. In fact, Carpenter so effectively puts her own song across that it is easily the highlight of the session, a song that when it arrives elicits a mental ‘ahh.’” — David Dupont, Cadence Magazine

“Patty Carpenter sings with a lot of soul. Evidence of her sensitivity and experience of having lived, rather than merely learned the music, permeates every track of her new CD This Time It’s Love. Patty demonstrates her broad range of dynamics, from the whispering articulations on the classic Lover Man to the down home, grinding gut-bucket sounds Patty offers on the slow backbeat rendition of Across the Square and All Blues. There’s about 58 minutes worth of music on this CD and all of it is worth every penny.” — Eric Nemeyer, The Green Mountain Jazz Messenger

“I was totally knocked out by the vocals. What a voice…. I flat out loved it…Patty Carpenter was an epiphany for me.”— Larry Routt, Music Programmer, WOBO, Cincinnati, OH

For her third recording, New Englander Carpenter showcases a flexible, supple, sweet, at times bluesy voice that is childlike, full of fascination and wonder about the world at large, rarely forceful, and fairly consistent emotionally. Standards such as “Lover Man” and “I Thought About You” are done in typical ballad style, while “All Blues” and “I Wish I Knew How It Would Feel to Be Free” have the singer taking some chances, spontaneously inventing on the former, getting down on the funky latter. She really shines on “I Ain’t Got Nothin’ But the Blues,” coming out of her shell with some scat and curved inflections. “Black Orpheus” is done nicely in Portugese and English, while the near-ten-minute funky groove biscuit “5-10-15” shows a more R&B-influenced side. The lone Carpenter original “Across the Square,” is similar to “God Bless the Child.” Scott Shetler (playing tenor, baritone, clarinet, etc.) and pianist Tom McClung are excellent soloists and supportive accompanists. — Michael G. Nastos, All About Music

“Her voice is light and swinging and has a natural haunting quality that helps her put across songs. … An eclectic and very entertaining session.” — Jerome Wilson, Cadence Magazine

Supple jazz vocalist who matches bluesy inflections with a cool tone in away that compares favorably to Susannah McCorkle. Carpenter’s voice ismatched by a tasty small jazz group; she’s usually her own accompanist (a laDiana Krall or Shirley Horn), but the very fine Tom McClung tinkles the ivories here. – listen.com

I am sooooooo glad I opened this packet this afternoon. I have been inundated with half finished CDs, demos, and this made the whole day nicer. I admit being addicted to those old jazz standards, and rarely will anyone get a better chance to enjoy them than when Patty’s voice is caressing your ears. Patty has a wonderful voice, soft, silky, slightly smoky, with enough air to inflate my ego on a bad day. What I am saying here, is Wow! Amazing sweet and masterful piano and organ by Tom McClung, great sax work by Scott Shetler, and perfect time/rhythm courtesy of Doug Raneri. And please, don’t forget those sweet licks by Draa Hobbs on guitar. From the jazziest, prettiest, lightest licks, to the fattest, fullest chords, I loved every minute of this recording. – Airmusic.com 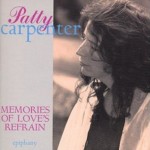 “This recording features jazz vocalist Patty Carpenter on eight eloquently interpreted tunes, backed up by some of the finest area jazz musicians. Carpenter applies her strong swinging voice to tunes such as ‘Undecided,’ ‘It Had to Be You’ and ‘Moonlight Becomes You.’ She seems to lean toward love songs and standards with sentimental qualities to which she applies great storytelling skill in interpreting the lyrics. Her rendition of Hoagy Carmichael’s ‘Stardust’ is delivered with emotion and genuine tenderness. A particularly good cut is ‘Bye Bye Blackbird,’ bluesy and sexy with the bittersweet feel of Miles in her tone…I find Patty’s work to be appealing on many levels. She clearly loves what she does, and her passion is infectious. This music is romantic and artfully presented.” – Green Mountain Jazz Messenger

“Patty Carpenter really knocked me out. Talk about laid back! She has a very warm and inviting voice, and knows how to use it to great effect. The musicians she hangs around with are no slouches either.” — Lenny Mazel, Jazz Director, KCME, Colorado Springs

“I really like Patty Carpenter. She’s not a copy of anyone. She has a unique voice that is really appealing.” — Paul Roy, Winthrop Big Band & Jazz Festival

“Patty Carpenter has a strong, clear and wonderfully buoyant trumpet-like voice and an affinity for long, swinging straight-ahead lines, like those of her favorite tenor saxophonists John Coltrane, Dexter Gordon, and Wayne Shorter. She also has an ear for the emotional content of the lyrics. She sings to tell a story and find meaning in the words. ..there’s a lot of Miles Davis’ bittersweet blues in her ballads and and Billie Holiday-like behind the beat phrasing in the tempo numbers. …Whether you swooned to Sinatra or jitterbugged to Goodman, Miller, the Dorseys, and Count Basie, whether you are a twenty or thirty something, a teenage slacker, a generation ‘X-er”, or a baby boomer you are sure to be touched by the marvelous, lyrical singing of Patty Carpenter.” — Marty Jezer, Record Review

As heard on her recordings including “Memories of Love’s Refrain” and “This Time It’s Love,” vocalist Patty Carpenter boasts an organic, relaxed, folk-like tone, an unerring rhythmic sense and masterly dynamic control. Carpenter’s repertoire includes standards, blues, rock, gospel, ballads and Brazilian. When she’s not fronting her own group, Carpenter performs with her ex-husband and their daughter, Melissa Shetler, as the Dysfunctional Family Jazz Band. – Seth Rogovoy, Berkshire Eagle